Did you catch the sarcasm in the title? No? Allow me to enlighten you. I spent my weekend in the hospital! “What happened?” you may be asking, it’s a very interesting story. At least I like to think so. It went something like this:

Friday, I felt bleh. Just worse than what my Lyme usually does to me. I figured I had some virus so I ignored it.

Saturday was even more bleh. I had no appetite and I didn’t feel like doing much of anything. But I worked through it, got some dishes done and then took a break at the computer. I was scrolling through my facebook newsfeed when my stomach started hurting like I’d never felt, awful nausea hit me, and I started feeling as if I was going to pass out. I messaged my mom on facebook and she was out of her room within a minute. We thought it was a gallbladder attack at first (I have issues with it, but we treat it here at home.) and so my mom made me some apple cider vinegar water which stops gallbladder attacks dead in their tracks. One sip of the stuff and I knew it wasn’t going to help me.

Rachel starts chanting from the couch, “Jump up and down!” and my mom and I were not in the mood for games, I was in awful pain and really didn’t feel like jokes. However, she was not joking. She remembered my mom will have us jump up and down when our stomach is hurting because it’s a way to tell if it’s your appendix causing the issue. Once my mom realized what Rachel meant I had the joyous task of jumping. I did it in front of the couch so that if it went badly I would have something to fall onto. I jumped and nothing happened and said, “See? Nothing!” Except I wasn’t able to finish saying it before I was saying, “Ow, okay, ow, this isn’t good.” and had to lie down onto the couch from pain. That’s when my mom decided I was going to the emergency room. My dad works night shifts (recent job change.) and was on his way home from work at the time, he had gone to work early and was coming home early, it was really amazing how it all worked out.

We didn’t have a terrible wait in the emergency room thankfully, we were moved into a room where they did several tests. The staff didn’t seem to know what to do with me, the only thing that made me nervous was the needle in the back of my hand for an IV, once the needle was out and all that was there was a tube that was taking my blood I was quite interested in the whole process. I began asking question about how the IV worked, and how far into my hand did the tube go. I must have asked about a million questions over the weekend, and I was lucky to have a staff that was more than happy to answer all of them.

Four vials of blood, and a cat scan later, (we arrived at the hospital at roughly midnight and got our test results around five am, I think…) my ER doctor came in with my test results: I had a stone in my appendix, which my mom and I didn’t even know was possible, but it was causing inflammation, infection, and would have eventually caused a rupture.

I was moved up to a room where I awaited my surgery, since it was an emergency surgery we weren’t sure on the time until shortly before it happened. It went rather quickly actually, I was taken down to recovery pre-op and the surgeon explained the procedure to us, and the anesthesiologist came and explained things to us as well, then before too long she was injecting my IV with the anesthesia.

I felt sort of weird, almost as if I should have been nervous about the surgery, but I never was. I knew the doctors have removed many an appendix in their day and mine wasn’t even as bad as others that they have removed, I was in very good hands and I just simply wasn’t nervous. I actually challenged myself to see how long I could fight off the anesthesia. I didn’t last very long. One moment I’m staring at the ceiling thinking. “I wonder how long people usually last before passing out on this stuff.” I blink and then a nurse is telling me that the surgery is over and went well. In my drug addled brain I was thinking, “What do you mean it’s over? I blinked! It is not over!” but I couldn’t talk. My voice wasn’t working. At all. But it didn’t stop me from signing. I don’t remember much of my forty-five minutes or so down in recovery very well, but my nurses told me that I had kept signing, it’s took them a few tries to figure out I was asking where my parents were. Then they said I would ask them again every few minutes.

My dad brought my sisters up to the hospital later that day, (they hadn’t seen me since I had left for the emergency room the night before.) and they helped perk me up and get me talking, if you could call it talking. I think I sounded more like a strangled frog, but I was communicating with them nonetheless.

Later that day a friend came up to the hospital with her four little boys. I was very out of it and the morphine had me feeling pretty rough and I sadly slept through a good portion of their visit,  but it was so good seeing them even if it was for a little while, I’ve missed them very much! 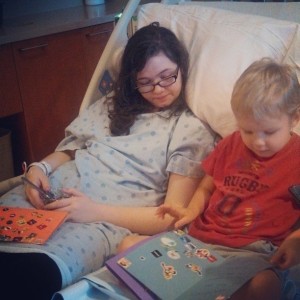 I was happy when I was discharged on Monday, I loved the staff at the hospital, but home has been far more relaxing. A little over a week later and I’m doing great! I’m moving around and starting to get back to normal, I’m still not allowed to do heavy lifting, but I am able to fend for myself again. :)

I want to thank all of the people who have been keeping me in their prayers through all of this! It’s been a roller coaster ride and I couldn’t have gotten through it without my family and friends praying for, and encouraging me.